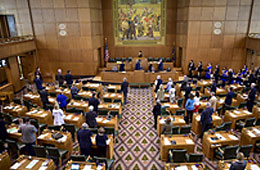 June 19, 2019 - On Tuesday, June 4, 2019, Governor Brown signed HB 5016, which set the State School Fund (SSF) for the 2019-21 biennium at $9.0 billion. That funding level is $28 million higher than what we planned for and upon which we built our budget for the 2019-20 school year. Because our district accounts for approximately 3.5% of all students in the state, we will receive approximately $980,000 of those additional funds in the biennium. With 49% coming in 2019-20, that equates to just over $480.000. Rather than earmarking those dollars at this time, our plan is to use the funds to ensure high school Student Success Coaches remain whole, address class size hot spots, and meet other student support needs.

Just over two weeks before she finalized the SSF, Gov. Brown signed HB 3427, which established the Student Success Act (SSA). The SSA calls for a new gross receipts tax on businesses and a reduction of income taxes for the payers in all but the highest of the state’s four tax brackets. The new business tax less reduced income taxes is estimated to generate $2 billion per biennium* to be spent on K-12 and other statewide education initiatives (*$1.6 billion in the 2019-21 biennium due to the delayed implementation of the tax - please see the May 14 article “House Bill 3427 Heads to Governor’s Desk” on the Budget Matters page of our website for more details).

Because the SSA passed the House and Senate with a supermajority and was signed by the Governor, it will become law 91 days after the closing of the 2019 Legislative Session and will go into effect on January 1, 2020. Those seeking to repeal the SSA will have 90 days from the Session’s closing to collect at least 75,000 signatures to refer the tax to voters; the group Oregon Manufacturers and Commerce filed a referendum in late May indicating it intends to do just that.

If the required signatures are gathered, the vote would normally take place in November 2020; however, SB 116 seeks to pull that vote up to January of 2020. At the time of this writing, the bill was in a Senate sub-committee of the Joint Ways and Means Committee. The bill is expected to pass both chambers and receive the Governor’s signature.

There would be three main impacts if voters overturned the SSA:

Stay tuned to the Budget Matters webpage for updates as they are available.