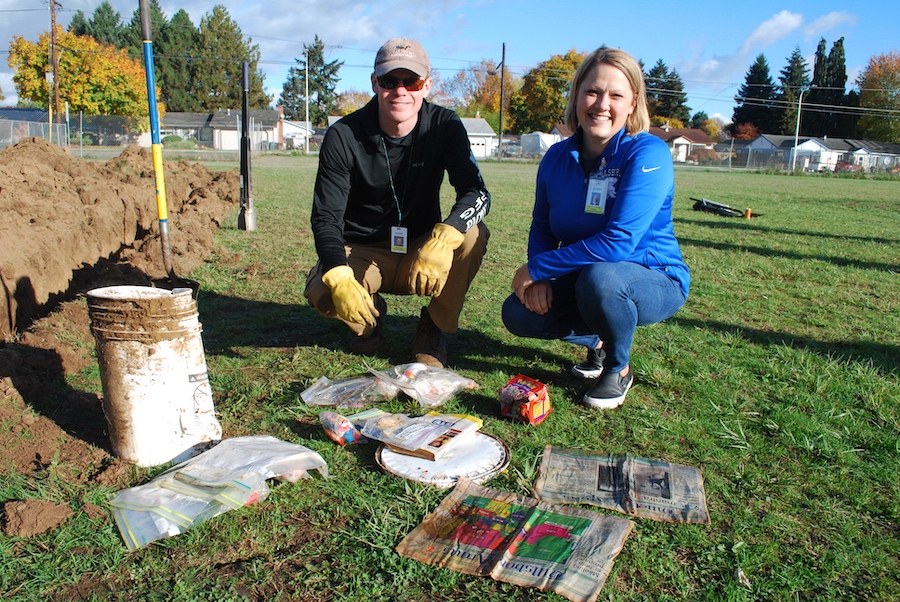 Nov. 2, 2018 - It took a couple hours and a 50-foot-long trench excavated with the efforts of our Facilities crew, but the time capsule buried by Brookwood Elementary first-graders in 1999 was finally unearthed on Friday, Nov. 2. The excavation was led by Terry Sayre, one of the first-grade teachers at the time (now at Tobias Elementary), and Michelle Jensen, current Brookwood principal. The time capsule was conceived by Sayre and the other first-grade teachers, Chris Begg, Theresa (Myrben) Carlton, and Gail Talcott.

"Unfortunately, back then, the GPS technology wasn't super," Sayre said, "so we marked the location [with what we had], which ended up being in the parking lot. We [did] know it was about 47 feet from the fence." With the help of an excavator and repeated scans with a metal detector, the trenching began at the originally-guessed location until the excavator reached the time capsule bucket.

Instructions left at the school dictated that it should not be opened until Dec. 16, 2019. The capsule, however, was severely damaged and water had seeped into the plastic storage bag, so that directive could not be followed.

"The plan was to originally open it up in a year," Sayre said, "but because the bucket got damaged, we're going to have to display it now."

Sayre and Jensen retrieved the contents to dry them off and ultimately display at the school. They included students' letters to their future selves, small toys and trinkets, Hillsboro Argus newspapers, a phone book, and other items of the times. Most of the items were protected and enclosed in sealed, plastic zip bags and the paper items may be salvageable with some drying time.

"A lot of the things inside are still good, so we're excited about that," Sayre remarked. "We made a big mess here, but it was worth it to find it."

"We're doing the very best we can to dry things out and preserve as much of this as possible or take photos of the things we can't," Jensen added. "[We plan] to do some sort of fun reveal with the students at Brookwood, and connect with the students who may have put some of these items in the time capsule." She noted with amusement a headline in the Nov. 11, 1999, issue of the Hillsboro Argus about a meeting to prepare for Y2K (perceived at the time to be an impending disaster for technology). "These were some of the things our kids were talking about 19 years ago."

A highlight was the arrival of some of the former first-graders, now young adults, to observe the initial digging and reminisce about their time at Brookwood. Friends since their Brookwood days, Jordan Kramer, Jake Harper, Duane Branson, Elizabeth McEwen, and Andrew Morton looked over staff photos and a class photo with Sayre and Jensen, and shared anecdotes and memories of their teachers and fellow students.

The unearthing was done in advance of site work that will be taking place for the construction of the replacement school at Brookwood. Construction of the school will begin June 2019 and continue through August 2020. Stay up to date on Brookwood’s and other projects at Hillsboro-Bond.org. Also, learn more about when the school was originally built in 1953.