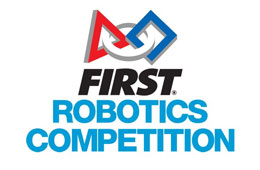 May 13, 2019 - HSD sent three robotics teams, comprised of students from all four of our high schools, to the World Robotics Championships in Houston, Texas, from April 16-20, 2019. Following is a recap of how they did.

The teams from Liberty and Glencoe participated in the FIRST® Robotics Competition (FRC) Championships with large robots. Team 6443 AEMBOT from Liberty nearly won the Carver Division. They were ranked 7th out of 68 teams with a record of 11-6-0, and won the Championship Subdivision Finalist Award and the Creativity Award sponsored by Xerox. Team 4488 Shockwave from Glencoe was selected to join the 8th alliance in the Galileo Division and played in the quarterfinals, but was defeated in that round. They ended up ranked 18th out of 67 teams with a record of 8-5-0. They won both the Industrial Design Award, sponsored by General Motors, and the Pit Safety Award.

The Awesome Nerds (Team 8371) FIRST® Tech Challenge (FTC) team - a neighborhood team that includes students from Century and Hilhi - faced tough competition in the FTC World Championships and ended up ranked 66 out of 88 teams.

Great job and congratulations to all of our teams - both student participants and adult mentors! We are proud of you and will continue to cheer you on next year!