Now for the fun part...Planting!

The moment the boxes were assembled and filled, eager kids would  run up to me, “When do we get to plant?!”

In their classrooms, the seedlings were bursting from their newspaper pots and climbing all over.  A few of the teachers caught me in the hallway, “Um, when are the seedlings going outside?”

“Oooh, not sure they’re going to make it that long.”

Indeed some of them, particularly the pumpkins and beans, were in need of a larger container.  Those got up-potted into cleaned milk cartons (thanks Wendy!) and returned to the classroom.

With STEAM Night done, Lakshmi and I were ready, and so were the students.

First we  would sneak in their room and take their seedlings outside.  Then we laid them out on the bed with respect for light, shade, and adequate spacing.  We also made room for any direct sow veggies they requested, like carrots, radishes, chard, etc.  We worried about skipping the hardening off of the seedlings, especially in the intense sunshine and warmth we were getting.  Ideally, a week before planting out, seedlings are left outdoors for increasing amounts of time to toughen them up before subjecting them to the elements.  With so many classes and so many plants, we weren’t sure how to make that happen. So decided to go for it and hope for the best.

Each class was a little different.  Some classes stayed in the classroom, while groups of five came out to the garden to plant their seedlings in turn.  Some classes all came out together to enjoy the garden and many oohed and ahhed at the zipping hummingbirds while waiting for their turn to plant.

When the first group was ready they found their plant start and were instructed to set it aside and dig a hole in that spot as deep as the pot is tall.  Then pop their plant in, fill in around it with soil and water it in. Those who didn’t get to start a seed in class, or whose seedling didn’t make it, chose a direct sow seed to plant.  One class had about 15 pumpkin seedlings. We made space for a few, and those that got to take theirs home got to choose new seeds to sow.

My only regret is that there wasn’t more for them to do. Many of the students would have happily planted the entire bed themselves.

Although, we lost many of the tender starts to the blazing sun, we reseeded those and now our garden is a lovely mix of early season veggies like peas, lettuce, kale, and radishes, fall veggies like carrots, pumpkins, dry beans, and a few summer treats like peppers, tomatoes, broccoli, and flowers like calendula, marigold, and chamomile.

In the center beds are some strawberries, spring onions and garlic that the kinders started in the fall, and a polyculture of corn, beans, and squash  (The Three Sisters) suggested by Mrs. Sebastian to enhance their studies of the Oregon Trail.

Along the east end is a berm with strawberries and asparagus. The berm frames in a rain garden area that will be planted with perennial native plants and other perennial non-invasives that support pollinators and beneficial insect habitat.  Having a natural space so near to our garden should keep the pest and predator populations in balance and bring in pollinators.

As a school garden coordinator my biggest challenge giving all my enthusiastic helpers enough to do.  I discipline myself not to plant a thing on my own, knowing that at next recess, I’ll have anywhere from three to fifteen pairs of energetic hands to direct.  I lay out the plants where I think they will be happiest, save the weeds, line up the watering cans, save the thinning, and then there they are. Helpers ready to go.  However, I do require an adult to manage the hose. 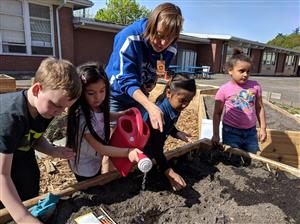 Next up: Planting the Rain Garden

We used the rest of the TWIG grant money to buy natives from the Portland Audubon plant sale on May 4th.  Now that the cool and wet weather is back it’s time to get them in the ground, and sow some wildflower seeds from West Multnomah Soil and Water Conservation District that have been cold stratifying in my refrigerator for a couple weeks.  Should be fun!