The Rain Garden that Sorta Isn't

Our rain garden isn’t a real rain garden.  Typical rain gardens are situated in a depression to encourage water to drain there.  They can also be fed by roof downspouts draining to artistic rock filled trenches. Sometimes rain gardens are linked, one overflowing to another and another.  The idea is slow the trip a raindrop takes on its way to the ocean. 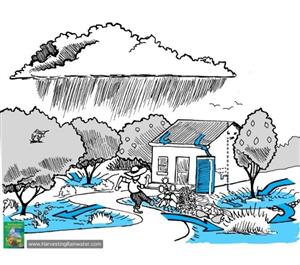 Reproduced with permission from Rainwater Harvesting for Drylands and Beyond, by Brad Lancaster, www.HarvestingRainwater.com.

There are numerous benefits to rain gardens.  Rain water is allowed to infiltrate into the soil reaching the deepest roots as it trickles through the strata to recharge aquifers.  During a rain event surface runoff picks up dirt, bacteria (Do the Dooty!), lawn care chemicals, and debris, and sluices directly to the watershed contributing to swollen creeks and contamination.  Rain gardens and bioswales reduce surface runoff and allows the soil and plant life to purify the water that rehydrates that landscape and recharges our aquifers. They can also provide food and habitat for pollinators, and beneficial insects and birds that will be able to keep our pest populations in check.

As beautiful and functional as rain gardens are, they should not be placed within 10 feet of a building foundation to prevent the buildup of hydrostatic pressure.  So for us, that means no creating a depression, and no channeling any additional water to this area of our garden.

However, the pavement between the building and the garden already slopes to this area, and one of the downspouts drains under the pavement here as well.  So I won’t direct more water to this area, but I do need to deal with what already shows up, and the cool shady microclimate (buildings to the north, east, and south). 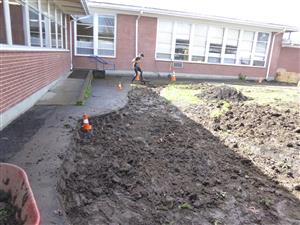 We removed the top layer of poorly draining clay soil and replaced it with the leaves we collected this past fall, compost, and left over blended garden soil.  The organic matter will absorb and hold far more water than the clay. It is analogous to placing a thick sponge on a ceramic plate.

Into this rich soil we transplanted several natives that lived elsewhere in the science garden prior to our redesign of the area; including a sword fern, a couple Oregon grapes, and a salal shrub.  We also added a shepherd’s hook with a suet cage and hummingbird feeder. Seeing all the activity this attracted as well as interest from the students, Lakshmi and I decided to add another.

Then using the remainder of the grant money from Tualatin SWCD and some funds from the Gro More Grassroots Grant, we purchased about 25 new plants from the Portland Audubon Native plant sale in May.  Early May brought record breaking temperatures that would be hazardous to tender young native plants, so I tended them at home and waited for our typical spring weather to return.  As soon as the clouds and rain came back, I brought the plants to school. (There is a full list of plants at the bottom of this article.)

I thought about how to design the area so the students could do the planting and maintain the space.  That means kids in the rain garden. To keep their shoes clean, the soil spongy, and the small plants safe, I added a flagstone path through the garden.  Around the base of the TWSCD sign, I piled rocks we discovered during our work parties, hoping to attract some small reptiles and amphibians.  With those elements in place I went to work positioning the plants (still in their pots) in the rain garden, giving thought to their size at maturity, as well as their sun/shade requirements, and overall aesthetics. 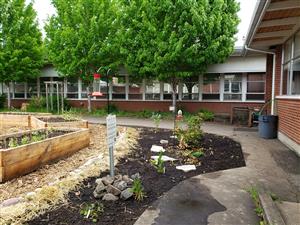 Everything in place, all I had to do is wait for kids to come running out at recess and notice me.  And they did. First one or two, then others would see them working and come over asking to help, then still more would arrive.  The process was simple, move the pot aside, dig a hole as deep as the pot is tall, remove the plant (with my direction), break up the bound up roots, pop it in the hole, and water it in.  Recess is usually just long enough to get one plant done, except for the big plants which took longer to dig a hole deep enough. Then a short time later, another group would appear. 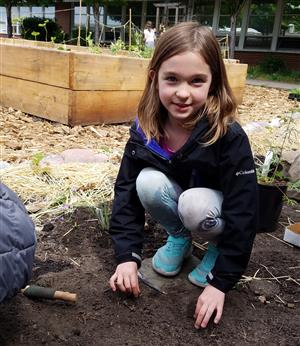 It’s inspiring to watch them work.  The typically rambunctious kids were often attentive and careful.  The curious asked questions, the shy ones waited for me to notice them and invite them in, but they were all engaged and eager to learn about what they were doing.  They peppered me questions that brought up many interesting points. Some finished their plant quickly and went on to help the others who were waiting for my attention.

One student tried to remove his plant (a blue eyed grass) by pulling it out of the pot by the stem.  The little bulb popped out, but the roots and soil stayed in the pot.

I crouched down and pointed out the bulb, “See that bulb?  The plant’s life support system is in there, and it looks OK, so I think your plant is going to be OK too.”

We removed the potting soil together put it in the hole he dug made a space for the plant and put it in the ground.  He briefly made eye contact and with an impish smile took off for the playground at full speed.

It took two days of recesses then all the plants were in and watered.  I also sprinkled some wildflower seeds from West Multnomah SWCD that I cold stratified in my refrigerator for a few week in the areas between shrubs.  Today there is still a lot of bare soil (that will be covered with fall leaves as soon as the trees see fit to share them) but in my imagination the plants are large and lush with flowers nodding in the breeze as the steady hum of bees and insects provide background to the chirping juncos and zing of the hummingbirds.

Next Up: Summer Planning! 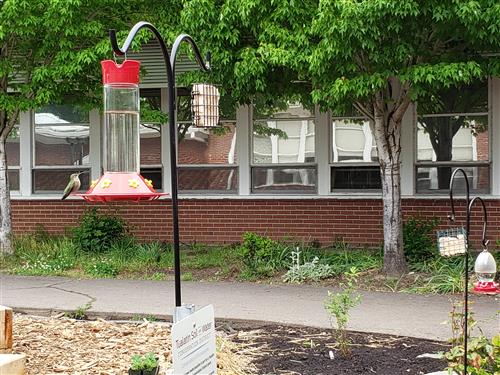