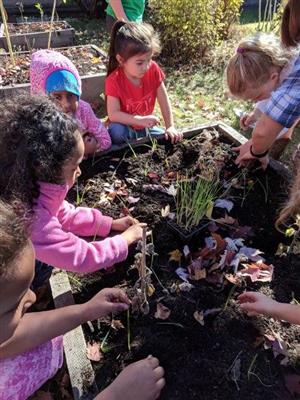 Last October our Science Garden was ready for bed, but before we sent it off to it’s winter slumber, Mrs. Petersen’s kinders tucked in some garlic bulbs and spring onions into the beds one of our parents generously donated a few years ago.

While the beds slept the onions and garlic put down roots and popped up small green shoots above the soil.

During the winter I finalized the permaculture designs for our new garden and shared them with our principal Mr. Allen and fellow garden coordinator Lakshmi.  Mr. Allen approved the designs but Lakshmi was concerned.

“So the old beds are going to be taken out?”

“Yes, we are going to build new ones.  One for each grade.”

“But what about the garlic and onions? The kinders were so excited and I don’t want them to be disappointed.”

“I was thinking we could transplant them.  Do you think they will survive?”

The time came to disassemble the old beds.  Luckily we had a bunch of beautiful Root Pouches on hand. We assigned a couple of our young workers to carefully remove the plants from the beds with as much soil as they could and pack them into the Root Pouches. That done they were placed under the maple trees awaiting their new home.

Once the garden was fully constructed, Lakshmi and the students transplanted them again into the new demonstration beds. Some stayed in the Root Pouches. Despite all this handling the garlic and onions kept growing. Then last week Lakshmi announced that the onions are ready for harvest. (The garlic will be ready in late June - early July.)

A few emails later we had a time and date set with a small group of Mrs. Petersen’s kinders to harvest the onions.

I arrived and popped my head into Mrs. Petersen’s room as the students sat on the floor listening to a story she was reading.  All 17 heads turned to look at me and she closed her book and asked the ones whose name was chosen from the jar to stand up and join me.  About half the class stood up, and after some shuffling I had my group six happy helpers.

We made our way out to the garden where I showed them the the difference between the round onion leaves and flat garlic leaves.  I quizzed a couple of them to make sure they understood. Then I showed them how to dig under the bulb and gently lift them up. Then to put the soil back into the ground.  In no time flat all the onions were lying in a fragrant pile next to where we were working.

I asked them to stay and wait while I got some water for washing.  Then they followed me over to the hose where we partially filled a bucket.  We all carried it back to the garden and loaded in our onions and twelve tiny hands gave them a gentle agitation to free the soil.  The water turned black and the onions turned creamy yellow. As we laid them on a table to dry, Mr. Allen joined us and admired their beautiful onions they proudly displayed.  He snapped a few pictures and congratulated them on their harvest.

As the onions dried, we watered the herb spiral with the wash water. Then they swept soil back into the garden and raked it smooth. In the freshly opened space, they planted several roma tomatoes and swiss chard starts Lakshmi donated.

Lastly we loaded up our harvest in a box and headed back to class to share it with the rest of the kinders.  Then the students thanked me with a group hug then rushed off to join their classmates in music class.

I may not get paid for this gig, but it’s still pretty great. 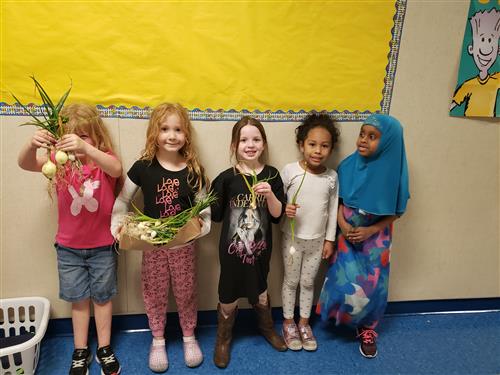